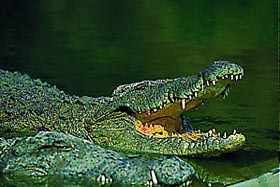 We were listening to the radio the other day and we heard a touching tale of another Aussie battler. Crocodile Mick is being stood over by Steve 'Zookeeper' Irwin, his wife Terri, and his company. Although Mick actually hunts wild crocodiles, according to Steve et. al he should not be calling himself 'The Crocodile Hunter'. We would like to make it clear that we @ punkandblanket.blogspot.com do not condone the slaughter of exotic animals (although we have heard that the crocs in the Northern Territory are out of control and roam the streets of Darwin at night), however we fully support Mick in this semantic debate.
Posted by punk & blanket at 4:08 pm

Since Claire joined us on this site we have received thousands of emails from some lovely people, but there have also been some that are proving to be troublesome. We feel it necessary to reiterate that Claire Voyant will not do house calls or give advice over the phone, and more importantly she will not reveal the name of Prince Harry's future bride. A lass by the name of Kiki is particularly insistent and we have even feared for Claire's life, such are the sinister undertones contained in her emails. Kiki, your address has been blocked by our software. 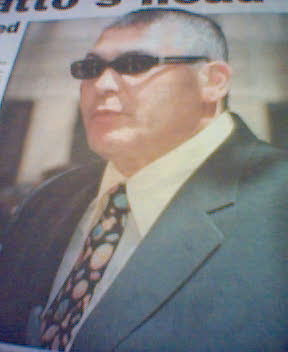 1. Arrange these mobsters into their respective Gangs under the headings Mob and Western Suburbs Clan:


I was once a regular patron of Crown Casino's Mahogany Room.
I am known as a Gentleman.
As part of my protest against sharing one razor with 38 other prisoners, my normally close shaven chin now sports a salt and pepper beard.
My once portly, Lygon St waistline is said to be receding due to the light cream based pasta sauces that are derigeur at Port Phillip Prison.
I am...

3. Match these underworld identities with their aka's:

Man
The Don
The Munster
The Truth
The Godfather
Tony
Benji


4. Who dobbed Carl Williams in for conspiring to murder Mario Condello?

5. What two words rang through the air seconds before Carl took a non-fatal bullet?

Our contacts in MI5 have wired us scorching intelligence! Jason 'Buckingham Batman' Hatch is not who he claims to be. James 'The Cad' Hewitt did not realise he would be exposing himself by using the same initials and our MI5 associates are stunned at his lack of imagination. Supposedly in rehabilitation for his cocaine addiction, The Cad had been planning this stunt for some time. The Secret Police seized Batman comics, DVDs, costume patterns, a sewing machine and a Rolls Royce refashioned into a Batmobile from Hewitt's country estate. In an extraordinary turn of events, James no longer denies parentage of Prince Harry. Friends of Hewitt have told police that James had been babbling he would one day scale the walls of Buckingham Palace and "reclaim his son", although it seems proximity to Harry has been motivated by greed; the young Prince's dot painting empire is now worth a fortune. British agents have discovered frenzied text messages sent by Hewitt to Prince Harry's mobile and what initially appeared to be touching sentiment turned out to be lyrics lifted from Cat Stevens' 'Father and Son' and Pearl Jam's 'Alive'.
Posted by punk & blanket at 1:51 pm 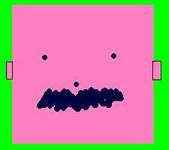 ...people who work for a living, pay taxes and die of natural causes.
Posted by punk & blanket at 10:02 pm

1. Who was the last person to call mobster Andrew ‘Benji’ Veniamin’s mobile phone before Dominic 'Mick' Gatto put him down at La Porchella restaurant?

a. Carl Williams
b. Ray Martin
c. Greg Domaszewicz
d. One of his girlfriends

2. Why was it unusual that Benji was photographed in the Queensland surf with his master Carl ‘the Truth’ Williams? 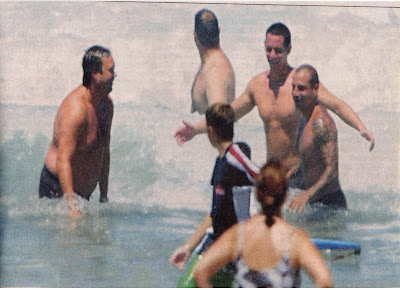 3. Underworld figure Nikolai Radev was known as ‘Nik the Russian’ and ‘Nik the Bulgarian’. Where was he actually from?

4. Nik had the word taxi tattooed on his penis - why? 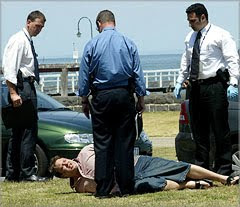 We've decided you are the right person to approach about this. We are artists in need of emancipation. So that we may concentrate on our artistic endeavours, we need a philanthropist. In return for your generosity we will include your name in the URL of our blog (eg punkandblanketandsirrichardbranson.blogspot.com) and we will weave you into every post. As we view you as an artist yourself we do not see our union as compromising our integrity. If it is of interest we are blonde and female.

Thanking You In Advance Sir, 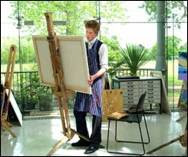 From the look of Claire's place it appeared she had been trancing all night. It was like a blizzard had taken place in a stationary store; paper strewn everywhere. We found ramblings written in texta on the walls and the fridge. Claire had spray-painted the letter Y in dots, in the same way our black brothers do, on all of her doors. We began to worry about her, wondering if she was referring to some dis-ease of her own (we've never known Claire to be political in any way so it was unlikely that it was a reference to Prince Harry's controversial dot paintings). The sparkle of her Melanie Griffith screen-saver caught our eye. This was unsettling, Claire is not one to leave electrical equipment on, it tends to flip her chakras. Tentatively we nudged her mouse, dissolving Melanie's sparkle to reveal an unnamed 23 page Word document. So far we have deciphered 10 pages. It's like peering through a mystical keyhole.

Claire must have been in quite a state as she had changed font every few paragraphs, returning obsessively to comic sans. It took us hours to disseminate the voices that spoke through her, and there certainly were some recurring themes involving popular music. Prince Harry will continue the tradition of noblesse oblige so beautifully embodied by his late mother. Instead of looking after the sick and the dying, Harry will stick with what he knows. His largess will concern the plight of celebrity offspring who have lost one (or two) parents, empowering them through music. Meeting Heavenly Hiraani Tigerlily Hutchence Yates and Frances Bean Cobain in rehab (once again taking the rap for William) will change his life. Knowing that 'art is the only real drug' Harry will use his considerable funds to finance the girls post-post electro grunge outfit - Children Of The Fallen (COTF). Casting himself as artistic director and Sean Lennon as producer, the bands first single will be titled - "Daddy, Why'd Ya Do What Ya Did?" Their album, simply titled Y will go platinum and the cover, designed by Prince Harry, will be heralded by Rolling Stone Magazine as a triumph in post-it modernism.

Just received this text from Claire - theres some writings @ my place let yourselves in I need some space
Posted by punk & blanket at 5:38 am 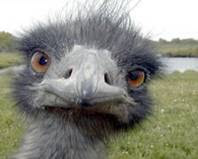 Lately I have been feeling a lot of energy from Prince Harry and I'm tapping into it. His journey will be a difficult one as he will have to carry his older brother (and his secrets). But it is his keen interest in the arts that will see him rise above it and step into his truth. It is his destiny to become the Patron Prince Of The 'Nanny Generation'. I don't really know what that means; the words just came.
Posted by Claire Voyant at 2:54 pm

The Victorian public have been fed a lie by Purana Taskforce. The whole drug-squad corruption thing is a smokescreen; the truth is, key evidence has been destroyed. Shortly before he was put down, Benji was entrusted with vital documents pertaining to The West Sunshine criminal portfolio. Whilst concealing bugs in his home, Purana detectives discovered a suspect mound in the rear left-hand corner of Benji's backyard. The stench of decaying flesh further raised their suspicion. The younger members - who always like to do things 'by the book' - were keen to call in Homicide, but the excitable Sergeant grabbed a nearby shovel and started digging. He uncovered not a body, but several large marrow bones, some old tennis balls, and the chewed remains of the West Sunshine documents. Recognising their significance, the Sergeant put them in plastic bags and sent them off for forensic. The report came back: the mauling of the documents had been so severe, the pieces left provided no conclusive evidence.
Posted by punk & blanket at 3:19 pm

Once again we are delighted to be privy to some scorching (and highly sensitive) information. In the early hours of this morning we received an urgent call from our friend in surveillance (no name). He was begging to come over to our office at The Righi Cafe in the Car Park Arcade, Malvern. He said he had some audio that we "had to hear". As it was 5am we agreed to meet him in three hours time 'cos The Righi doesn't open till 8.
At precisely 8.01am, our friend (no name) burst through the door, ordering a cappaccino on his way to our table. Slamming down his iPod, he looked at us all wild-eyed, trembling with silent excitement. Offering us a headphone each, he pressed play. The following is what we heard:

*General restaurant sounds: plates, glasses, conversations etc* Waiter: Hello Mr Gatto. The usual? Table 301?
Mick: Yes
*footsteps* Acquaintance #1: Hi Mick!
Mick: Hi.
*footsteps*
Acquaintance #2: Mick, hi.
*sound of backs being patted*
Mick: Good to see you.
Acquaintance #3: G'day Mick.
*sound of handshake*
Mick: Ciao.
Enemy: Hello Dominic.
Mick: Get out of my office.
*sound of gun cocking* *footsteps, running* *sounds of Mick sitting down - chairs, tummy rumbling*
Waitress: The usual, sir?
Mick: No thanks, just a Caesar Salad today.
*sounds of footsteps, trotting*
Benji: Hi buddy.
Mick: Hello stranger.
*sounds of panting*
Waitress: Would your friend like a bowl of water? *whispers* He's got beautiful markings.
Mick: He'll be right. *to Benji* Have you eaten?
Benji: No, Carl's on a diet which pretty much means I'm on a diet too.
Mick: Atkins?
Benji: Nah, The Zone.
Mick: You must be really hungry then, my friend.
Benji: *sniffs* Yeah.
Mick: Well, I've just been to the butcher and he gave me a special treat for you...lots of marrow for a shiny coat!
Benji: *excitedly* That'd be great, mate!
*sounds of chairs pushing out, footsteps, trotting* *slam of back door, silence for 30 seconds*
Benji: Where's my bone, Mick?
*yelping, three gun shots*

Another Incredible Story About Claire