On the way home with VLine

Well, we didn't win. Noreen did.


We were anxious to get inside, behind those concertina doors screening off the judges. It was past one o'clock - clearly punctuality is only mandatory for entrants. The show secretary did pop her head through the doors to acknowledge our arrival as we were the first ever metropolitan exhibitors, but she very quickly snapped them shut. The judges tardiness allowed us to take advantage of the two course luncheon: corned beef, mustard sauce and a selection of vegetables (not necessarily different) and apple pie.

The concertina doors finally parted to reveal the show. The displays were so genuinely breathtaking it took us a while to get to our own creation. After getting sucked in by the bearded irises for a while we did away with politeness and pushed our way through to the Worst Arrangement section. We looked everywhere for our names but as the eyesight of the stewards was bad, the decision had been made to mark us down as 'P. Blanket.' Reece and his staff at Mooroopna Florists did follow our instructions: make it look like shit, wrap it in newspaper and attach the filthiest card you have in the  shop. 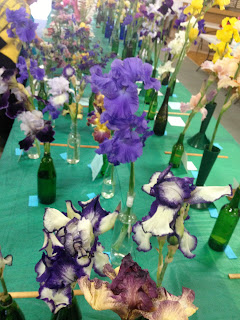 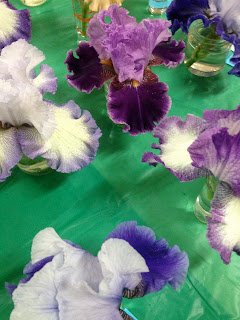 Their choice of card was magnificent - a torn piece of an envelope with a scribbled missive. Our proxy stager also showed independence with her creativity, choosing to remove most of the petals of the only actual flower and housing our arrangement in the previous evening's Butter Chicken container, label still in tact with lingering aroma.

As bad as it was, it was not worse than reigning champ, Noreen. 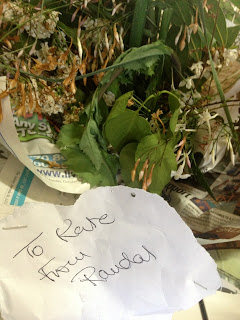 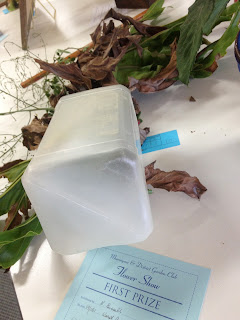 Noreen was obviously sure of herself in this category. We learnt on the way down she had suggested the show secretary relax the NO LATE ENTRIES rule for us city folk and had offered to secret our entry through the back door. She didn't see us as a threat. And we weren't, because she won. 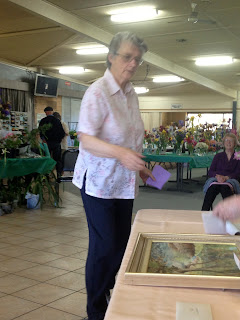 We didn't even come second. The Mooroopna Garden Club has not seen the last of P. Blanket. 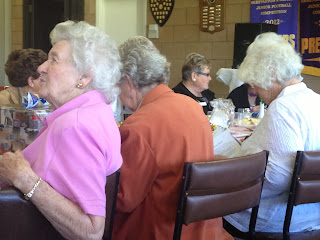 The Judges at Lunch 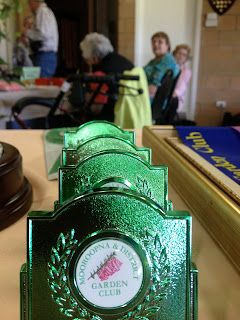 On the way there with VLine

We are finally in transit heading towards certain victory. We are competitors in the Mooroopna 62nd Anniversary Spring Flower, Craft and Floral Art Show, Section 19 (Novelty Section), No. 151 'Worst Arrangement'. It's been a long and winding road. The schedule said NO LATE ENTRIES, but our train from the city was scheduled to arrive at 11.48am and all exhibits must be staged ready for Judging by 11.30am. We placed a call to the show secretary who happens to be related to us but she was categorical in her response: NO LATE ENTRIES. At first we were slightly taken aback, as we did expect some level of favouritism, but then we realised that the show secretary lives by the same moral code we do. She was doing the right thing, but nothing was going to stop us. Rather than adopt the supplier/technician model a-la Jeff Koons/Damian Hirst and employ studio serfs, we decided to be more inclusive/collaborative with regional surrealists. They were not hard to find.

The genesis of our idea came from an incident in the 1980s where neither of us were present. Our friend Randal had received an apology in the form of a bunch of very expensive roses from his frenemy, Kate. In disgust, he chopped their heads off with a designer cleaver. Our Worst Arrangement entry is titled 'To Kate From Randal' .

After confirming with the show secretary that entries in the Worst Arrangement category were exempt from Item 1 of the Rules and Definitions which expressly states that 'All exhibits must be grown by Exhibitors and have been in his or her possession for two months prior to the show', we got to work. We needed a proxy artisan and a proxy stager. We ran our remote plan by the show secretary: a local florist had agreed to assemble our work to our exacting instructions and an upstanding and capable community figure would stage our entry. The show secretary, shocked, said 'No! You have to make it yourself!' By this point we were becoming exasperated by what we perceived to be the undercurrents of a regional blockade against city entrants. We reiterated that the florist is working to our exacting instructions, we were not just buying the worst arrangement in the shop. It was OUR creation. The show secretary had bigger fish to fry. There were only 45 minutes remaining before registration would be cut off, the phone was running hot and she 'didn't want to listen to any more voicemail messages'. In a loud voice so her staff could hear she simply said 'Alright then, I didn't hear any of that,' then louder still: 'And no one here heard any of that'.
Posted by punk & blanket at 11:46 am 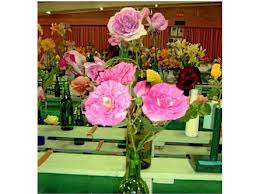 We are making
our entry
Now.
Posted by punk & blanket at 2:37 pm 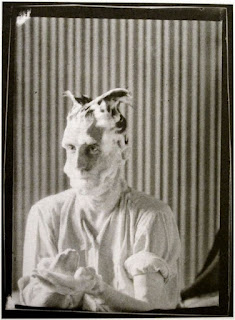 The word 'art' interests me very much. If it comes from Sanskrit, as I've heard, it signifies 'making.' 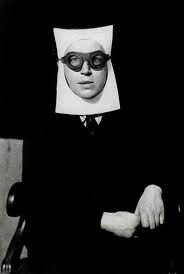 How not to be bored any longer when with others

This is very difficult. Don't be at home for anyone, and occasionally, when no one has forced his way in, interrupting you in the midst of your Surrealist activity, and you, crossing your arms, say: "It doesn't matter, there are doubtless better things to do or not do. Interest in life is indefensible Simplicity, what is going on inside me, is still tiresome to me!" or an other revolting banality.