Jack Elliot, Eddie Maguire and Us

Yes, it has been a while since we've been home. Thanks to the thousands of concerned fans for their emails and flowers and general enquiries as to our whereabouts. We want you all to know we're both fine, in fact we've been having a great time working on a new and varied punk & blanket project. We refuse to be locked into one form of release so we are diversifying. Behold: p&b Records!

Our first recording is of our friend Jack Elliot whom we 'discovered' singing in Florentino Bistro the night after the Melbourne Cup last Spring Racing Carnival. After lunching at Jack's penthouse in Carlton, we knew that he'd be wonderful to work with as he is a very keen singer who charmed us through all 3 courses. It would not be an understatement to say that Jack is an extremely confident man - even his lewd comments seemed 'right', so as soon as we decided to launch the record label we called Jack straight away.

We're happy with how it's sounding. We'll have our sample podcast online soon. We're realising how great diversification actually is, and once again, we thank Claire Voyant, our guide, our confidante, our light, for steering us toward our natural destiny. Claire spoke of the importance of being polymathic, to not limit our gift and to take something from the success of Eddie Maguire, whose omnipresence is a result of him maximising his gift. Her words inspired us beyond belief, but we were puzzled by her example. Eddie Maguire is a worry. We see him regularly in our off-leash dog park. He has a dark aura and an intolerance of Staffordshire Terriers. Once, when our terriers were 16 weeks old, Eddie saw us coming and bundled his children (who were not that small) and their footy and ran to the other side of the park, nervously glancing backwards every ten metres or so. We have also heard a rumour that he's developing an interest in Scientology, which wouldn't surprise us given his new job working for Jamie Packer, fresh King of Australia and devout Scientologist. When Tom and Katie were out here for The Goanna's funeral, Eddie and Jamie were spotted stealing off for late night audits in the stars' hotel room. If Eddie is indeed a Sci-Fi, we fear for the future of Channel 9 and the Collingwood Football Club. 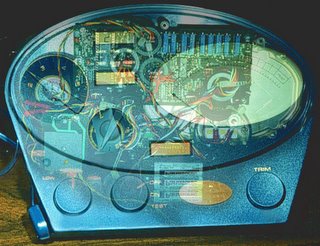