As we predicted, proximity to Altyian was a piece of cake. Last weekend we were helping our copper mates with a Blue Light Disco. As we were cutting up the oranges, Altyian arrived with Nikki. This was our opportunity to become firm friends with the winner of The X Factor. Nikki, in her somnambulistic way, posed no barrier to a quick friendship with her intended. We went straight up to Altyian and asked him whether people had ever told him he looks just like the late Michael Hutchence. Fifteen minutes later we are helping a weeping Altyian into the car and taking him to the beach where he sits in a lotus position on the sand. He stares silently and intensely out to sea - like Bono thinking about the third world - for a good minute and a half. He turned to us, and with the last vestiges of the day's sun glistening in his glassy eyes said 'You guys...are the best....best friends...I've ever...ever...had.' Nikki remained in the vehicle.

We spent the next few days ferrying Altyian and Nikki from one facebook hook-up to another and engaging in what is perhaps technically considered in the eyes of the law, stalking of his former Altourage. During a boring stake-out of disgraced manager, Steve Gold's new townhouse, we felt Altyian was ready to be briefed on Sir Elton's proposition. Leaving out the bit about the cave, which is really a stupid idea, we tell Altyian Sir Elton wants to meet him. Nikki rested in the passenger seat (we'd let her ride up front).

As you guys know, we have our moments with Sir Elton and we're a little bit mischeivious re his husband, but he is our friend, so we were really disappointed by Altyian's dispassionate response. He said he had trusted the wrong people from The Win onwards. A lot of people were trying to impress him and quite frankly, he said, he was taken for ride. This had caused him to 'shut down'. We go 'Altyian, Sir Elton has seen it all before. He's had his fair share of freeloaders. It might be really good for you to talk to him.' Altyian, who is looking more and more like Rasputin on a dark night, starts pointing his finger at us and says 'The stage is calling out for me, and I really need it. It is my second home and it does things to me that I could never express in words.' We go 'Altyian, Sir Elton is a performer too. He's had a lot of experience.' At this point, Nikki wakes up; she wants to go home.

The next morning, we weren't surprised when Natalie Biddles rolled up uninvited to breakfast with Altyian. She is exactly as she appears on Channel 7's Today Tonight, a smitten single mother using her daughter, Elle, as a proxy server. As she parked her bottom on the seat next to us we smelt trouble. Omitting introductions, she just started asking private questions about Sir Elton. We indulged her a little bit - yes, he loves flowers. Yes, he is neat - but when she asked us schoolyard questions about the gender dynamics between the couple, her time was up. We dropped a couple of Xanax in her scrambled eggs and waited for her to bid her farewells and go home to bed.

We were now alone with Altyian (Nikki was there but was busy drawing Altyian's tattoos on the tablecloth with the crayons the waiter provided). This time it was Altyian who raised Sir Elton's offer, inquiring as to whether Sir Elton will be providing him with a contract, songs written by him and Bernie, video clip deals, merchandise, a publicist and options on feature films. We were aghast. Altyian is a lazy reality TV star with a shocking sense of entitlement. Thank God for the digital mandala Claire sent us when she heard we'd befriended Caveboy. We held our phones in Altyian's direction and left the building. Nikki focussed on keeping the colour within the lines.


Thank you to the Herald Sun and Today Tonight.
Posted by punk & blanket at 4:43 pm

We didn't get an invite to Friday's wedding because William and Harry hold us responsible for coining the term 'The Booze Brothers', not that we care anyway. Looked more like a funeral to us.

Sir Elton's husband, David Furnish, took our flippant request to send us a couple of pictures a little too seriously. Self-shot images of David with his arms around Ian Thorpe, David with his arms around the King of Tonga, David in peels of laughter with Tara Palmer-Tomkinson, close-ups of the china and David with his arms around Ian Thorpe again...and again clogged up our phones and made us miss seeing one of our AFL friends score two goals. We were getting a bit over David's, 'I'm middle aged but I'm up with technology' catharsis when things changed dramatically. An image came through of David nursing a weeping Sir Elton John. A concerned Ronan Keating can be seen hovering behind them. This was followed by a text from David going: 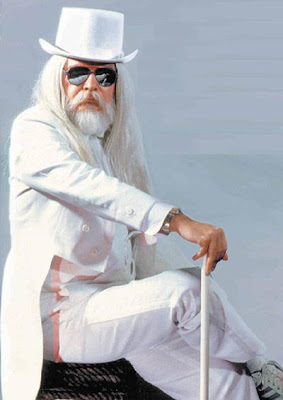 The next thing the phone rings and it's David saying 'Sharon wants to speak to you,' and a sobbing Sir Elton gets on the line. 'That poor boy! The poor gypsy boy!' he cries into the receiver. 'He lives in a cave! Those animals. They let him fly. They let him fall! Have you got his number? David could call him for me....get him over here for some proper re-hab.' We tried to interject as we are don't think Altiyan's on drugs - if only it were that simple - he seems to have a host of psychological problems. We weren't sure that spending time in Sir Elton's compound would be in Altiyan's best interests, but Sir Elton was already on to renovating one of the spare rooms into a cave and was shouting out the numbers of slate companies to David and telling him to write them down. 'It's all about the cave,' said Sir Elton, 'He needs to get in touch with it again.' We finally just started talking over the top of him, informing him that Altiyan's was no romantic cave, but a miserable shelter on a suburban beach littered with empty V cans and McDonalds packaging. Sir Elton didn't seem to get it. He just paused then said 'I can get those things.'

Sir Elton wanted to leave the wedding (and the filthy power ballads playing there). He now had one purpose: Save Altiyan Childs. Frankly, we don't think it's worth it so to prevent them from jumping on their jet we said we knew Altiyan really well (which was a lie, but we felt confident that if pressed we could establish an intimate relationship with Altiyan in a very short space of time) and we'd have a chat to him. Using flattery, we convinced Sir Elton that Altiyan would need to be prepped before meeting The Most Famous Homosexual in the World.
Posted by punk & blanket at 3:42 pm